Sacramento, Calif. – Legislation to address the rise in harassment of election workers was approved by the California State Legislature yesterday. Senate Bill 1131, authored by Senator Josh Newman (D-Fullerton), will protect workers in California by providing them with the option to keep their home addresses confidential. The bill is co-sponsored by the California Voter Foundation and Brennan Center for Justice. It includes an urgency clause and has until September 30, 2022 to be signed by the Governor.

“Threats to democracy is the number one issue on the minds of U.S. voters right now,” said Kim Alexander, President of the California Voter Foundation, citing results from NBC News’ latest public opinion poll. “SB 1131, upon being signed into law, will immediately give democracy’s frontline workers greater ability to protect themselves and their families from harm, the sooner the better.” 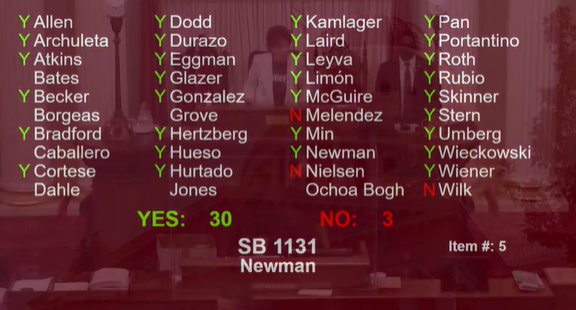 In recent years, election workers have been subject to “doxing” (publicly revealing private information) and increasing harassment as the result of their names, photographs and addresses being posted online and on social media platforms.

“This legislation is, sadly, very much needed to protect the Californians who do the largely thankless but essential work so critical to safeguarding our democracy,” said Senator Newman. “There is absolutely no reason that public servants should ever deserve to have their personal safety compromised simply as a result of their conscientious service in conducting or overseeing civil processes on behalf of our state.”

To offset the wave of harassment and violent threats directed at election workers, SB 1131 will allow election workers to enroll in either of the state’s existing address protection programs — the Secretary of State’s Safe at Home program or the state’s address confidentiality program for public officials.

Safe at Home, designed to protect survivors of domestic violence and people who work at reproductive healthcare facilities, redirects the mail of victims enrolled in the program to a different mailing address. Alternatively, election workers may enroll in a program that allows state and local agencies to respond to public records requests without disclosing the address of an election worker.

"Election officials should not have to fear for their safety or the safety of their families while doing their job,” said Gowri Ramachandran, Senior Counsel in the Democracy program at the Brennan Center for Justice. “California must protect them as they protect our elections. Enacting this bill will make the state a national leader in safeguarding election officials and keeping our democracy fair, free, and open to all.”

In the final stages of the legislative process, SB 1131 was expanded to include all public employees who are subjected to credible threats arising from that work to enroll in Safe at Home.

To schedule an interview with Senator Newman, contact Lizzie Cootsona at 916.651.4029.