This edition of CVF-News provides an overview of the significant problems California voters experienced on Super Tuesday, when voters in Los Angeles County encountered wait times as much as four hours to cast a ballot and voters in other counties also experienced delays due to connectivity issues with the statewide voter registration database. The inability to access the California Secretary of State's web site and its online polling place lookup tools contributed to voter confusion.

The California Voter Foundation, which has long advanced election security and working to ensure voter confidence, is taking a close look at what went wrong to determine what changes can be made before November and beyond so these problems are not repeated in the future. One hundred percent mail ballot delivery to voters in LA (and beyond, in light of health concerns) is being considered but comes with administrative challenges that must also be assessed.

There is a lot of finger-pointing going on right now, which is not what best serves voters. We need solutions, not excuses. The LA Board of Supervisors is moving forward with an investigation into what went wrong; the California Legislature should do likewise.

We need our county and state leaders working together in the coming weeks and months to make improvements and ensure California's elections are secure, inclusive and conducted first and foremost with voters' needs in mind. 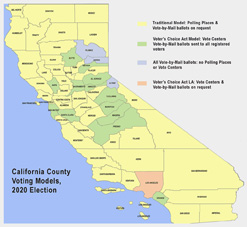 As has been widely reported, Los Angeles County voters experienced excessive wait times, as much as four hours, in order to vote at the county's new vote centers, implemented through the Voter's Choice Act (VCA).

The VCA is a new voting model California lawmakers enacted in 2016 that allows the state's 58 counties that opt to implement it to eliminate neighborhood polling places and replace them with county-wide vote centers that, while far fewer in number, are open more days, allow voters county-wide to use any one of them, and can provide more services to voters like language assistance and obtaining replacement ballots. VCA counties are also required to send every registered voter a vote-by-mail ballot. Los Angeles was given an exception to this requirement in the law and allowed to phase in 100 percent mail ballot delivery over several elections.

Los Angeles also developed in-house its own new voting system, called Voting Solutions for All People, or VSAP, over a ten-year period with input from numerous advisors and stakeholders. However, a number of problems with it were identified during certification testing. California Secretary of State Alex Padilla certified the VSAP system on January 24 with numerous conditions as reported by KPCC/LAist. See this Politico story by Kim Zetterfor an in-depth account of how VSAP was developed and the company that helped build it.

The rollout of LA's early voting centers did not go smoothly as reported by John Myers and Matt Stiles for the Los Angeles Times. Many observers hoped the kinks would be worked out by Election Day.

They were not. Voters around the county waited in long lines, often caused by check-in delays due to slow connections and new e-pollbooks, used for the first time in LA, needing rebooting. Delays also resulted from machines becoming inoperable, often due to jams caused when voted ballots were fed into the voting machines, and sites not having enough voting machines. Only federal write-in paper ballots were on hand at vote centers, and voters were required to fill in the name and office of the candidates they wanted to vote for in order to use them. There were no other backup ballots at vote centers nor ballot-on-demand printers such as those other VCA counties serving large populations have provided in their vote centers.

The LA Times and other news organizations documented the numerous problems and voters' reactions as well as calls by members of the Los Angeles Board of Supervisors for an investigation (for those interested in hearing the questions the board asked about the VSAP system and VCA model before March 3, have a look at this January 28th hearing transcript, starting on page 45).

California’s Secretary of State, Alex Padilla, issued a statement on March 5 saying he is “calling on Los Angeles County to mail every registered voter a ballot for the November 2, 2020 General Election in addition to improving the performance of Vote Centers."

Padilla, who sponsored the Voter's Choice Act in the State Legislature, and State Senator Ben Allen, who authored it, both criticized Los Angeles for seeking and getting a special exemption in the law that allows LA to phase in 100% mail ballot delivery (according to Registrar of Voters Dean Logan, approximately 62% of the county's 5.5 million voters were sent mail ballots for this election). Sen. Allen issued a statement via Twitter that he is pursuing emergency legislation to require the county to either mail every registered voter a ballot in November or add more vote centers.

Logan issued a statement in response, and also conducted an election eve news conference apologizing for the challenging day voters had in his county. The sparring among officials was covered by the LA Daily News and the Los Angeles Times, as well as KPCC, which also documented what went wrong.

At its March 10 meeting, the LA County Board of Supervisors will consider a motion to conduct a 45-day investigation into what went wrong in the county this election with its new voting equipment and voting model.

Mailing every registered voter a General Election ballot may be necessary not only for Los Angeles but statewide (and nationwide) as well, in light of the spreading COVID-19 coronavirus and the advice of medical professionals to avoid public gatherings, which would include polling places and vote centers. See this Wired column by Jon Stokes, making the case for why the nation needs to plan now for 100% mail ballot delivery.

Los Angeles was not the only county to experience technical problems on Election Day. As reported by the Sacramento Bee, Sacramento and 14 other counties (Alpine, Calaveras, Contra Costa, El Dorado, Fresno, Madera, Merced, Napa, Sacramento, San Luis Obispo, San Mateo, Shasta, Stanislaus, Ventura and Yolo) lost access to VoteCal, the statewide voter registration database, during the morning of March 3, dramatically slowing down the voting process in several counties. In Sacramento, another Voter's Choice Act county, 84 vote centers could not access the statewide database and thus were unable to use the vote center laptops to check whether voters at vote centers had already voted.

Sacramento relied on a contingency plan developed by the county staff which involved calling the county election office to obtain a voter's precinct, issuing and printing provisional ballots on demand, and having voters fill out conditional registration envelopes into which the provisional ballots were placed. In Fresno, voting came to a standstill due to this and other technical challenges, as reported by the Fresno Bee. Even counties that were not operating vote centers experienced long wait times trying to access VoteCal, which is maintained by Secretary of State Alex Padilla. The agency's web site was also down for part of the day, leaving online polling place lookup tools inaccessible to voters.