With the Legislature's last day of session happening today (and the wee hours of tomorrow morning as well) this edition of CVF-News highlights CVF's legislative activities and last month's Future of California Elections conference, where CVF hosted a panel on addressing voting challenges for housing-insecure Californians.

We have also been keeping busy working on addressing threats to election officials and their staff. To help those working to promote peace and security in U.S. elections, CVF has begun tracking stories via our Protecting Election Officials in the News page and have added a Resources for Supporting Election Officials section to our web site highlighting initiatives and tools being provided by caring folks across all sectors.

A few of my favorites are Pam Fessler's Telling our Story via the Elections Group, the Carter Center's Taking Care of Yourself to Serve Others wellness guide, the new Committee for Safe and Secure Elections chaired by former Orange County Registrar Neal Kelley, the Election Infrastructure Initiative to provide federal funding support to local and state election offices, De-Escalation Tools from Princeton's Bridging Divides Initiative, and Building a Resiliency Network from Over Zero.

We are also very close to getting SB 1131/Newman out of the legislature and on to Gov. Newsom's desk. This bill if enacted into law will immediately allow election workers and other California public employees to enroll in Safe at Home to keep their personal information private. More about that below, as well as some reflections and photos from last month's Future of California Elections conference,

I had a wonderful time introducing our new staffer Samantha Abelove to all of CVF's colleagues and friends and spending time with folks in person again. It was a great reminder of the strong community of democracy advocates we have in this state and nation and gives me hope in these challenging times.

Among the hundreds of bills California lawmakers will take up in their final day of the 2021-22 legislative session is Senate Bill 1131, authored by State Senator Josh Newman (D-Fullerton) and sponsored by the California Voter Foundation and the Brennan Center for Justice.

If enacted, SB 1131 will allow election workers to keep their voter registration address confidential and also no longer require counties to publish the names of poll workers. Initially introduced to also allow election workers to enroll in the Safe at Home address confidentiality program, that provision was expanded in the Assembly to allow any public employee, such as teachers, public health care workers and code enforcement officers to enroll in Safe at Home, a program initially designed to shield locations of survivors of domestic violence from potential attackers. It includes an urgency clause so it requires a two-thirds vote in both houses of the Legislature; if signed into law by Gov. Newsom it will immediately go into effect, ahead of the November 2022 election. 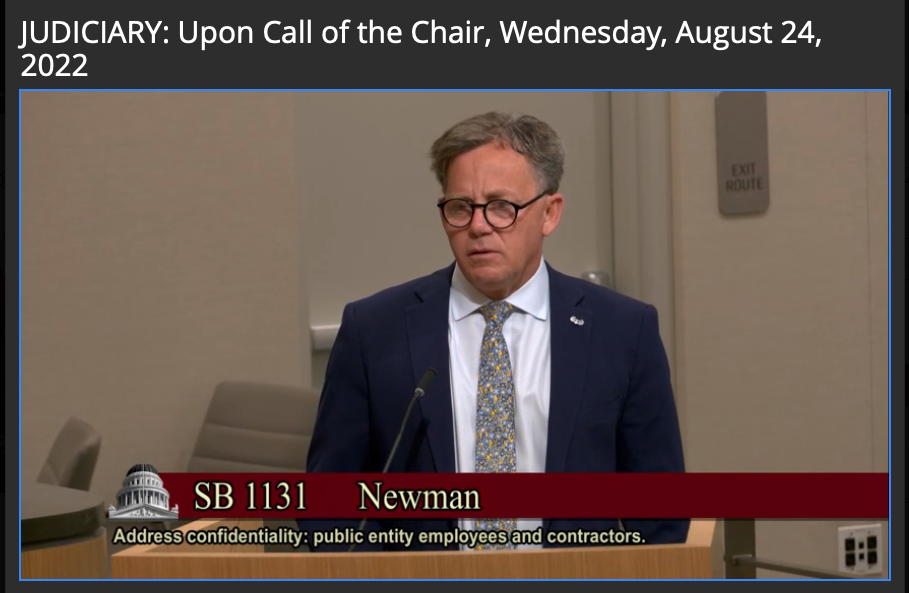 SB 1131 passed out of the Assembly on Aug. 22 on a bipartisan vote with no "no" votes cast, and was taken up last week by the Senate Judiciary Committee. That hearing included a number of witnesses in support, and one lone caller in opposition.

His testimony included threats of "We're coming" and that politicians should "fear the people", leading committee member Sen. Scott Wiener to ask the AT&T operator to retain the caller's phone number so the State Senate could investigate the threats he made. This testimony underscored the very need for the bill, and the committee passed SB 1131 on a 9-0 vote. Tonight we'll see if the full Senate once again votes in support of SB 1131 and moves the bill to Gov. Newsom's desk.

CVF's 2022 legislative activities also included a budget request CVF supported along with a number of other voter advocacy groups to include $85 million in the 2022-23 state budget to fund voter education and outreach by state and local election offices. Unfortunately this funding was not included in the budget and is needed to fight the rampant mis- and disinformation fueling threats against election workers and undermining voter confidence, and to ensure California's underrepresented populations aren't further left behind in the shift to increased use of vote-by-mail ballots.

This legislative year also saw the introduction of an online voting bill, SB 1480/Glazer, which CVF opposed along with California Secretary of State Dr. Shirley Weber and more than a hundred other organizations. SB 1480 was pulled by the author just before its Assembly Elections Committee hearing in June and did not advance.

Last month on July 25, CVF board and staff members participated in the 2022 Future of California Elections conference which took place both online and in person in Burbank, California and organized this year by the League of Women Voters of California and sponsored by the Evelyn & Walter Haas Jr. Fund.

The conference theme was Democracy for All: What’s Next for Building Equity in California’s Elections? CVF Board Member Mindy Romero, Founder and Director of the Center for Inclusive Democracy, was one of the keynote speakers at the conference. Additionally, CVF President Kim Alexander gave in an interview about the conference, which can be watched here.

Panelists shared personal experiences with engaging housing-insecure Angelenos with the voting process and why it is important for trusted messengers to be involved with outreach. Election officials shared their experiences collaborating with facilities that serve populations at risk and the benefits of creating voting opportunities at these familiar locations. The population of housing-unstable Californians is vast, and includes not just the estimated 160,000 homeless Californians but also many of the estimated 50,000 formerly incarcerated Californians now eligible to vote under Prop. 17, and many of California's 2.6 million+ college students. The panel included this Powerpoint presentation highlighting the registration and turnout rates among housing-insecure Californians compared to others, and panelists' work on behalf of this community.

​
About the California Voter Foundation