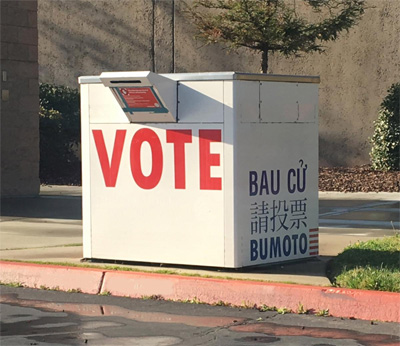 Over the past several months the California Voter Foundation has been conducting a study examining rejected vote-by-mail ballots in the November 2018 election in three California counties (Sacramento, San Mateo and Santa Clara) to learn more about the problem of ballot rejection and suggest ways to address it. This research is being conducted in collaboration with Dr. Mindy Romero, founder and director of USC's Center for Inclusive Democracy (formerly the California Civic Engagement Project).

As our report nears completion, we are sharing a few of our key findings since we, like others, feel the urgent need to prepare as best we can for the November presidential election, when all active, registered California voters will receive and be encouraged to cast vote-by-mail ballots in response to the coronavirus pandemic. In-person voting options will also be available to voters.

Our study found that:

These and other key findings will be further examined when our complete report is published.

The issue of ballot rejection has been in the news lately. On July 13, the Associated Press published an investigative story by Michael Blood which found that over 100,000 California Primary ballots were rejected, representing a nearly 1.5% rejection rate.

AP reported that the top reason for rejection was late ballot return; another recent investigation, by National Public Radio's Pam Fessler, similarly reported that over 65,000 mail-in ballots cast by voters in recent state primaries were also rejected due to lateness. And the Washington Post published a story on July 15th about ballot delivery issues, funding challenges and leadership changes at the US Postal Service that are impacting timely mail delivery and reported that USPS is advising voters to mail their completed ballots at least one week prior to their due date.

For its part, the USPS conducted an internal study of the ballot delivery problems in Wisconsin's April primary. The agency's report, released on July 7, "identified potential nationwide issues integrating election office’s vote by mail processes with the Postal Service processes which could impact future elections."

As I expressed in the AP story, the only thing worse than people not voting is people attempting to vote and having their ballots go uncounted. California has enacted numerous reforms and safeguards to prevent ballot rejection but the problem persists. Concerns about mail delivery delays and its impact on California voters continue to grow, as KPIX TV's Wilson Walker reported on July 24th.

CVF will keep doing our part to educate and prepare voters (we even have in the works a new vote-by-mail song I prevewed in a July 22 live online interview with Capital Public Radio!). And we look forward to sharing our complete study findings in the upcoming weeks. In the meantime, below is the social media graphic we circulated for the Primary and will be updating and promoting in coming months.