Los Angeles County's new voting system — dubbed "Voting Solutions for All People," or VSAP — has raised concerns from election security experts. Dozens of advocacy groups have warned California's top election official that the electronic touchscreen system used for in-person voting relies on QR codes to tabulate votes. QR codes are vulnerable to hackers and system malfunctions and cannot be easily verified by most voters, U.S. government and outside experts have found.

Early voting in-person begins in Los Angeles County Saturday morning, Oct. 24, at more than 100 polling places with an additional 650 to open Oct. 30 and running up until Election Day.

Voters can cast ballots at any one of the 766 Vote Centers throughout the county, regardless of where they are registered. Voters can also register or re-register a change of address at any Vote Center up until Election Day. And they can also drop off ballots.

Every active voter in Los Angeles County — roughly 5.6 million — has by now received a mail-in ballot. Voters can drop those ballots in the mail postmarked by Election Day or into any of the more than 400 official drop boxes throughout the county no matter where they are registered to vote.

Nervous voters in California are walking their mail-in ballots into elections departments so they can personally hand them to an election official.

They want to be 100 percent certain their ballot gets counted.

“It feels like every voter I talk to is on edge thinking for some reason their ballot might not count,” said Melinda Dubroff, registrar of voters in San Joaquin County.

Every qualified ballot will be counted and there’s really no need to worry once a ballot is mailed or placed in an official drop box, elections officials say. The state’s safety protocol for drop boxes is rigorous.

But voters have reason for anxiety. 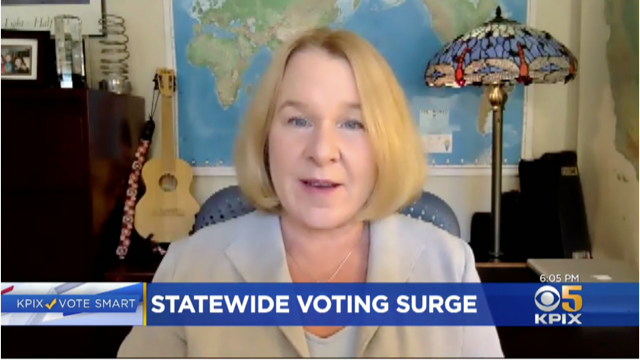